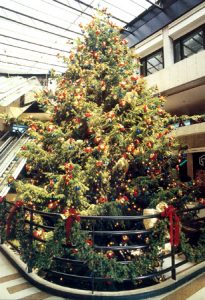 There are 7 thousand colored lights beginning on December 4th that will light our path in virtue of the hope of Christmas. There are precisely 7,000 lights that will glow with the power of 45 thousand volts that decorate Telcels Christmas tree.

The tree is 16 meters (52 ft.) in height, 10 meters (32 ft) in width and 4 tons in weight. It also was decorated with 500 Christmas ornament balls, 500 bows and the beautiful star of Bethlehem at its top. By presenting this tree we extend our best wishes to you during 1999 and the next millenium.
[WPSM_AC_SH id=121]This project was completed by John Egan and his sons. The first image shows the process of transportation of large Christmas trees by airplane. The photos below illustrate the process of lowering the 52′ tree by crane though the ceiling. 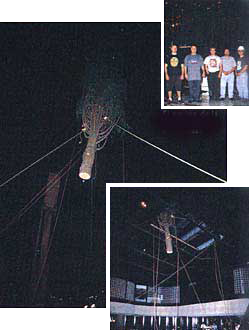